As the region’s population rapidly moves towards old age, and with several countries already at an advanced transition stage (notably Lebanon, Morocco and Tunisia), there are a host of challenges that undermine the prospect of ageing with dignity. At the forefront of those obstacles are poverty, unemployment, inadequate social protection systems, and emerging changes in family dynamics.  Moreover, deteriorating security conditions increase the vulnerability of older persons as protracted conflicts continue to undermine development in the region. All those factors raise legitimate concerns about whether the older persons of today, and of tomorrow, can age with dignity.

Another major concern is the insufficient attention, efforts and investment currently allocated to address older persons’ needs, since most Governments are focusing on young people’s issues.  Governments would be better equipped to tackle those competing priorities if they consistently adopted an integrated and life-cycle approach to development planning, where each age group in the population is taken into consideration.

At the global level, there are three major frameworks designed to address the issue of ageing and achieve the wellbeing of older persons: the 1994 International Conference on Population and Development (ICPD), especially its Programme of Action and the Cairo Declaration on ICPD beyond 2014 in the Arab region; the 2002 Madrid International Programme of Action on Ageing (MIPAA); and the 2030 Agenda for Sustainable Development and its SDGs.

The 2014 review of the ICPD Programme of Action in the Arab region indicated that many countries had made measurable efforts over 20 years to achieve progress at the policy and institutional levels in response to ageing.  According to the third regional review of MIPAA in May 2017, the institutional arrangements on ageing vary widely across the region, in the form of a governmental department, national committee or policies. However, the socioeconomic conditions of today’s older persons in the Arab region remain vulnerable, and future generations of older persons are likely to face similar challenges if interventions are not immediately undertaken.

ESCWA is supporting the efforts of its member States to translate the fundamental principle of the 2030 Agenda (“leaving no one behind”) into their policies and, in doing so, to adhere to all agreements and mandates to protect the human rights of older persons. The ESCWA Social Development Division addresses the silent advent of ageing and its consequences in the forthcoming Population and Development Report, entitled Prospects of Ageing with Dignity in the Arab Region, to be launched in 2018. Based on a rigorous demographic, socioeconomic and cultural overview of ageing, the report investigates various factors that perpetuate and intensify the vulnerability of older persons. It attempts to fill a significant research gap, align current development planning with future needs, and provide evidence-based projections on requirements and services to meet the needs of older persons today and by 2030.

ESCWA is also taking the lead in championing ageing issues at the regional level through various platforms, including major regional consultations such as the third regional review of MIPAA; and the eighteenth meeting of the Heads of National Population Councils, held in Amman in November 2017, in partnership with the League of Arab States and UNFPA.

In addition, ESCWA supports its member States in addressing the issue of ageing within the framework of an ongoing field project designed to strengthen national capacities for integrated, sustainable and inclusive population and development policies in the Arab region. The project aims to build the capacity of national stakeholders, namely government institutions and civil society organizations, to jointly integrate inclusive population priorities in development policies and ensure their effective monitoring and evaluation.

In the context of this project, ESCWA is supporting the Lebanese Ministry of Social Affairs to implement a policy-development process aimed at reducing selected duties and taxes imposed on older persons to improve and increase their participation in society. In Morocco, ESCWA is supporting the Ministry of Family, Solidarity, Equality and Social Development in developing a national strategy on older persons. It organized a workshop in February 2017 on the theme “Towards a strategic framework for older persons in Morocco” that brought various governmental and non-governmental stakeholders together to discuss priorities and challenges. 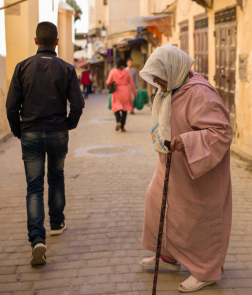