Figure 11: Percentage of the population aged 15 and above who are literate 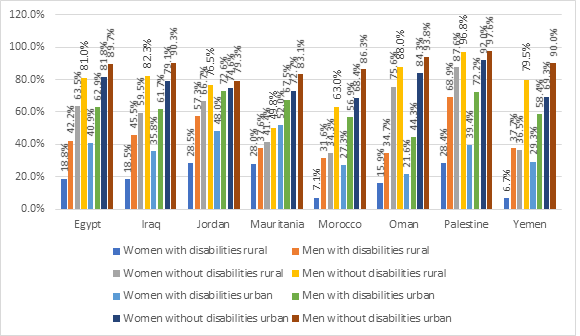 Note: For Palestine, urban includes areas categorized as camps in the data source. For Jordan, the data include a high proportion of persons without disabilities whose literacy status has not been stated – see country profile.

It is important that literacy data be considered in light of the age-disability nexus. The proportion of children who learn to read has increased steadily in the Arab region during the last fifty years. Consequently, the regional literacy rate today is much higher among the young than among the old. As of 2016, according to UNESCO, 90 per cent of youth aged 15-24 were literate, compared to only 53 per cent of older persons aged 65 and above. Among older persons, the female literacy rate is more than twenty percentage points lower than that of males, whereas the difference between the rates for female and male youth is a mere two points.[1] The fact that the average age of persons with disabilities, especially women, is very high may in part explain why their literacy rates are so low.

Furthermore, the relative difference in literacy rates between persons with and without disabilities appears more considerable in those countries where persons with disabilities are particularly overrepresented among older persons, such as Oman and Morocco. However, data disaggregated by disability, literacy and age are not available, which makes it difficult to draw definitive conclusions about the impact of each factor. 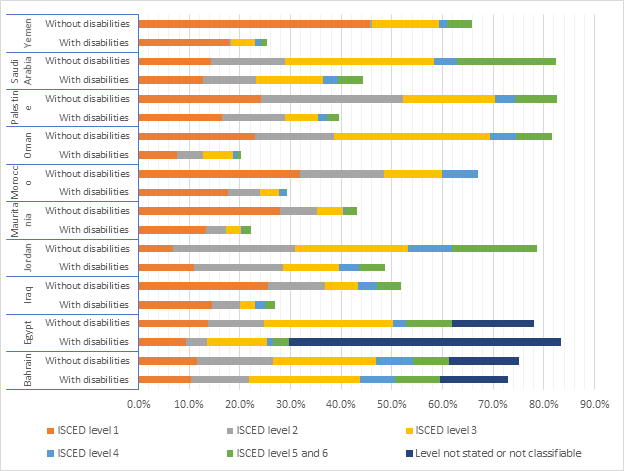 Note: Ages are 5+ for Bahrain, Mauritania, Morocco and Yemen, 6+ for Egypt and Iraq, 10+ for Oman, Palestine and Saudi Arabia, and 13+ for Jordan. Morocco has a single category for ISCED levels 4-6 (see country profiles). 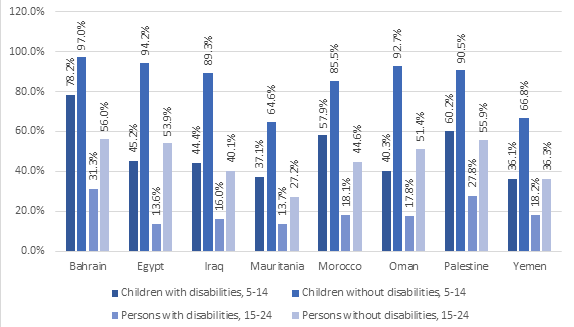 Persons with disabilities encounter a multitude of barriers to schooling. The hurdle may, in many cases, be due to misconceptions among family members about the nature of disability and a lack of understanding about the needs and capacities of persons with disabilities, resulting in neglect or discouragement. When going to school, students with disabilities often have to navigate poor transport, road infrastructure and inaccessible educational facilities. At school, classmates may be insensitive to differences and even perpetuate stigma and isolation. Teachers tend to lack training on how to accommodate diverse needs. Even if they have received training, they may not have the necessary resources (such as teaching aids or adapted curricula) to deliver appropriate instruction. Schools lack the funding for support programmes and specialized support personnel to prepare students with disabilities for courses and to retain them once they are enrolled.[3]

It is critical to remember that attendance rates do not reveal whether the education is inclusive and/or of good quality, in line with the targets of SDG 4 and Article 24 of the Convention. If these criteria are not met, higher attendance rates among persons with disabilities do not necessarily translate into better learning outcomes in terms of, for example, literacy, nor in a higher social awareness about the rights and capacities of persons with disabilities. It is also important to bear in mind that the data on attendance do not tell us whether education comes at a direct or indirect financial cost to persons with disabilities and their families, bearing in mind that both the 2030 Agenda and the Convention call for education to be free at least at the primary and secondary levels.

There are three main approaches to educating students with disabilities: segregated in special school settings, integrated where they join mainstream institutions but have to adapt to the system, and inclusive where the educational system accommodates the students. The SDGs and the Convention, in letter and in spirit, call on States to promote the inclusive model in so far as this conforms to the interests and wishes of persons with disabilities. However, ensuring that the needs of persons with disabilities are accommodated in mainstream educational institutions – for instance, by adapting the facilities and by ensuring that the school personnel are properly qualified – may be a lengthy process requiring consultation and financial resources. If this processed is rushed, the quality of the education risks being compromised.

Furthermore, sometimes persons with disabilities themselves prefer a segregated approach. While it is possible for hard-of-hearing students to participate in mainstream schools with the use of hearing aids, deaf persons have expressed a preference for an environment where the main mode of communication is sign language and where they are not excluded from daily conversation and engagement.[4]

In the Arab world, a variety of education services have been established for different types of impairments, initially by the private sector (both non-profit and for profit) with gradually increasing government involvement. Despite growing appeals for the inclusion of students with disabilities, especially following the ratification of the Convention, segregation persists in most countries. Relatively little research and evaluation has been done to investigate the impact and effectiveness of the three education models in the region. The resultant lack of information about the services and their outcomes impedes both advocates and policymakers from making well informed decisions.[5]

Although the age-disability nexus in part explains the fact that persons with disabilities’ rates of literacy and educational attainment are low and suggests that these rates could be expected to progressively rise, this does not mean that the current situation for older persons is acceptable. Older persons, with or without disabilities, have the same right to participation, information and independence as everybody else. Being able to read and write is not less important to them than to others. It is therefore important that educational opportunities are expanded and improved for adults as well as for youth.